1. The Lord Jesus Himself prophesied that God would incarnate in the last days and appear as the Son of man to work

Bible Verses for Reference:“Be you therefore ready also: for the Son of man comes at an hour when you think not” (Luk 12:40).“But as the days of Noah were, so shall also the coming of the Son of man be” (Mat 24:37).

“For as the lightning comes out of the east, and shines even to the west; so shall also the coming of the Son of man be” (Mat 24:27).

“For as the lightning, that lightens out of the one part under heaven, shines to the other part under heaven; so shall also the Son of man be in His day. But first must He suffer many things, and be rejected of this generation” (Luk 17:24–25).

“And at midnight there was a cry made, Behold, the bridegroom comes; go you out to meet him” (Mat 25:6).

“And I turned to see the voice that spoke with me. And being turned, I saw seven golden candlesticks; And in the middle of the seven candlesticks one like to the Son of man, clothed with a garment down to the foot, and girt about the breasts with a golden girdle. His head and His hairs were white like wool, as white as snow; and His eyes were as a flame of fire; And His feet like to fine brass, as if they burned in a furnace; and His voice as the sound of many waters. And He had in His right hand seven stars: and out of His mouth went a sharp two edged sword: and His countenance was as the sun shines in its strength” (Rev 1:12–16). 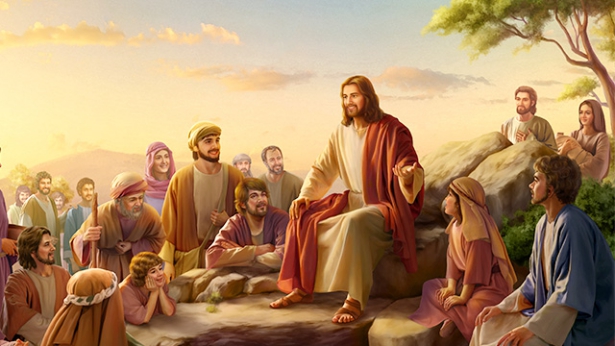 from “How Can Man Who Has Delimited God in His Conceptions Receive the Revelations of God?” in The Word Appears in the Flesh

For several millennia, man has longed to be able to witness the arrival of the Savior. Man has longed to behold Jesus the Savior riding a white cloud as He descends, in person, among those who have pined and yearned for Him for thousands of years. Man has also longed for the Savior to return and be reunited with them; that is, longed for Jesus the Savior, who has been separated from people for thousands of years, to come back, and to once again carry out the work of redemption that He did among the Jews, to be compassionate and loving toward man, to forgive the sins of man and bear the sins of man, and even bear all of man’s transgressions and deliver man from sin. What man longs for is for Jesus the Savior to be the same as before—a Savior who is lovable, kind, and venerable, who is never wrathful toward man, and who never reproaches man, but who forgives and takes on all of man’s sins, and who will even, as before, die upon the cross for man. Since Jesus departed, the disciples who followed Him, as well as all of the saints who were saved in His name, have been desperately pining for Him and awaiting Him. All those who were saved by the grace of Jesus Christ during the Age of Grace have been longing for that exultant day in the end time when Jesus the Savior descends on a white cloud to appear before all people. Of course, this is also the collective wish of all those who accept the name of Jesus the Savior today. Everyone in the universe who knows of the salvation of Jesus the Savior has been desperately yearning for Jesus Christ to suddenly arrive to fulfill what Jesus said while on earth: “I shall arrive just as I departed.” Man believes that, following the crucifixion and resurrection, Jesus went back to heaven upon a white cloud to take His place at the Most High’s right hand. In like manner, Jesus shall descend again upon a white cloud (this cloud refers to the cloud that Jesus rode upon when He returned to heaven), among those who have desperately yearned for Him for thousands of years, and He shall bear the image and wear the clothing of the Jews. After appearing to man, He shall bestow food upon them, and cause living water to gush forth for them, and shall live among man, full of grace and full of love, vivid and real. All such notions are what people believe. Yet Jesus the Savior did not do this; He did the opposite of what man conceived. He did not arrive among those who had yearned for His return, and He did not appear to all people while riding upon the white cloud. He has already arrived, but man does not know Him, and remains ignorant of Him. Man is merely awaiting Him aimlessly, unaware that He has already descended upon a “white cloud” (the cloud which is His Spirit, His words, His entire disposition and all that He is), and is now among a group of overcomers that He will make during the last days.

Those who obey the truth and submit to the work of God shall come under the name of the second incarnate God—the Almighty. They will be able to accept the personal guidance of God, and shall acquire more and higher truth and receive the real human life. They shall behold the vision that people of the past have never seen: “And I turned to see the voice that spoke with me. And being turned, I saw seven golden candlesticks; And in the middle of the seven candlesticks one like to the Son of man, clothed with a garment down to the foot, and girt about the breasts with a golden girdle. His head and His hairs were white like wool, as white as snow; and His eyes were as a flame of fire; And His feet like to fine brass, as if they burned in a furnace; and His voice as the sound of many waters. And He had in His right hand seven stars: and out of His mouth went a sharp two edged sword: and His countenance was as the sun shines in its strength” (Revelation 1:12–16). This vision is the expression of God’s entire disposition, and such an expression of His entire disposition is also the expression of the work of God when He becomes flesh this time. In the torrents of chastisements and judgments, the Son of man expresses His inherent disposition through the speaking of words, allowing all those who accept His chastisement and judgment to see the true face of the Son of man, a face that is a faithful depiction of the face of the Son of man seen by John. (Of course, all this will be invisible to those who do not accept the work of God in the Age of Kingdom.)

from Preface to The Word Appears in the Flesh

I tell you, those who believe in God because of the signs are surely the category that shall suffer destruction. Those who are incapable of accepting the words of Jesus who has returned to flesh are surely the progeny of hell, the descendants of the archangel, the category that shall be subjected to everlasting destruction. Many people may not care what I say, but I still want to tell every so-called saint who follows Jesus that, when you see Jesus descend from the heaven upon a white cloud with your own eyes, this will be the public appearance of the Sun of righteousness. Perhaps that will be a time of great excitement for you, yet you should know that the time when you witness Jesus descend from the heaven is also the time when you go down to hell to be punished. It will herald the end of God’s management plan, and will be when God rewards the good and punishes the wicked. For the judgment of God will have ended before man sees signs, when there is only the expression of truth. Those who accept the truth and do not seek signs, and thus have been purified, shall have returned before the throne of God and entered the Creator’s embrace. Only those who persist in the belief that “The Jesus who does not ride upon a white cloud is a false Christ” shall be subjected to everlasting punishment, for they only believe in the Jesus who exhibits signs, but do not acknowledge the Jesus who proclaims severe judgment and releases the true way of life. And so it can only be that Jesus deals with them when He openly returns upon a white cloud. They are too stubborn, too confident in themselves, too arrogant. How could such degenerates be rewarded by Jesus? The return of Jesus is a great salvation for those who are capable of accepting the truth, but for those who are unable to accept the truth it is a sign of condemnation. You should choose your own path, and should not blaspheme against the Holy Spirit and reject the truth. You should not be an ignorant and arrogant person, but someone who obeys the guidance of the Holy Spirit and longs for and seeks the truth; only in this way will you benefit.

View all posts by Davis Gary